FINDING OUR NEW FORT THE JEROME A. COHEN AND JOAN LEBOLD COHEN ART CENTER BEACON, NEW YORK OPENING OCTOBER 20, 2012, 6-8 PM
ETHAN COHEN PROJECTS presents Finding Our New Fort, an exhibition of artwork by the artists of The KuBe Collective, curated by Isaac Aden and Joseph Ayers.
The exhibition brings together ten artists from the newly formed group, The KuBe Collective, at Ethan Cohen’s Kunsthalle Beacon (KuBe). Finding Our New Fort does not refer to a particular subject matter; rather it aims to be a reflection of the artists who work in one building, under one roof, collectively. The work is a sampling that varies in subject and media.
The title of the show comes from Stephen Dickens’s painting, Finding Our New Fort Near Schussler Park. The work depicts remnants of an industrial civilization: obsolete factory buildings and outdated structures, a reflection of the buildings and structures in Beacon that are reinvented to shelter and support the arts in the community.
ISAAC ADEN’S installation, HOTEL Oscar Tango, frames the exhibition between parenthetic neon lights draped over a large mirror. Aden located the materials for the installation on site, reinventing their form and function to support and frame much of the work in the exhibition.
Mimic Dream, by AYA UEAWA, is a self-portrait within a master of camouflage, the Mimic Octopus. Floating between imagery of lotus flowers over a gold-leaf background, the portrait reveals a hideaway and disguise superimposed upon sacred symbols.
JOHN ASLANIDIS is represented by two works from his series Sonic Network. The Australian painter meticulously paints sonic patterns of concentric circles. The series is a collaboration with Berlin-based audio artist Brian May. The works include a generative audio soundtrack that interacts with the painting.
SEAN BREAULT’S painting of Katsushika Hokusai’s woodblock, The Great Wave Off Kanagawa, uses simple patterns and texture to suggest the movement with enamel on metal. The subtle motion in the work relaxes the tension in the iconic, frozen moment.
ETHAN COHEN FINE ARTS 211 FISHKILL AVENUE, BEACON, NEW YORK 12508 T 212-625-1250 F 212-274-1518 www.ecfa.com ecfa@ecfa.com


ERICA HAUSER’S small paintings are ironic observations of the familiar: a truck, stars, and text. In the work, White Super, the word “super” barely fits the limits of the canvas.
CORIE DURKIN’S collages and t-shirts patch together layers of print media, human skin, and found objects. The disparity between the sacred and profane is stitched together with ambiguous texts. Durkin uses many media for self-expression. His multiple self-portraits with prose illustrate a new voice for contemporary culture.
The series Chicks and Cocks, by SHAQE KALAJ, juxtaposes images of roosters and hens with images of men and women. The animals are depicted actual size while the men and women are scaled down. The works are installed against a repurposed cafeteria-tray railing to accentuate the sizes. The juxtaposition and play on words becomes fodder for thought, humorously comparing the two species of animal.
JOSEPH AYERS’S work draws upon connotations of materiality and perception. Ayers creates memorials to the difference and space between the two. In Night Watcher II, he uses wood stain on milled wood to paint life form.
Korean artist KIM CHUN HWAN uses the outmoded local Yellow Pages to create waist-high, triple tiered cylinders. The material was found on-site, discarded and unused. Like his work with magazines, Kim once again transforms minimal material from the familiar into original form.
TESS ELLIOT’S photo light boxes document small, natural waterfalls at night under colored spotlights. The manipulation of scale and wonderment of the images suggest utopias within neglected, seemingly insignificant places.
---
Finding Our New Fort will be open through the end of the year with continuous rotations of installed works. Isaac Aden and Joseph Ayers worked in collaboration with Ethan Cohen and resident artists in the building to bring the collective together.
This exhibition is open by appointment. For appointments and inquiries, contact 212-625-1250 or info@kubeny.org.
ETHAN COHEN FINE ARTS 211 FISHKILL AVENUE, BEACON, NEW YORK 12508 T 212-625-1250 F 212-274-1518 www.ecfa.com ecfa@ecfa.com 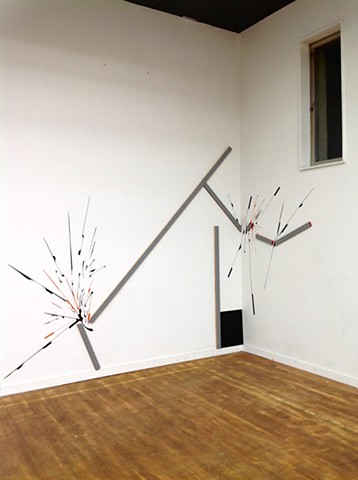